This morning, one of my customers called me and told me that they bought some new Lenovo laptops (Lenovo ThinkPad S540), but they was unable start OS Deployment using SCCM/PXE.

Normally when I see this behaivor, it’s caused by a missing driver in the boot image, so I told them to verify that the driver was loaded correct.

Here is a guide to verify the network driver in a SCCM Boot Image:
https://www.ronnipedersen.com/2009/04/importing-network-drivers-into-the-windows-pe-boot-image/

But the driver was loaded correct, so I requested the SMSTS.log and found another common issue.

In the SMSTS.log we got the following message:
“Failed to get client identity (80004005)” and “Failed to request for client” 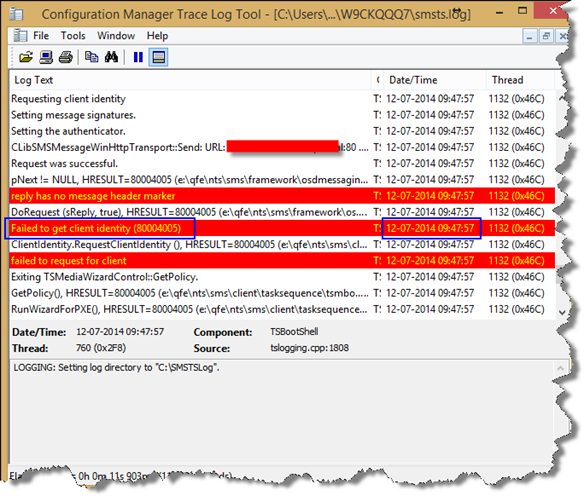 After changing the BIOS time on the client, it could be deployed successfully.

Normally this is a rare situation, but if you experience this on many client in your environment, you might want to automate this completely. A fellow MVP Niall Brady has a great blog post that explains how this can be done by adding a prestart command to your boot image :